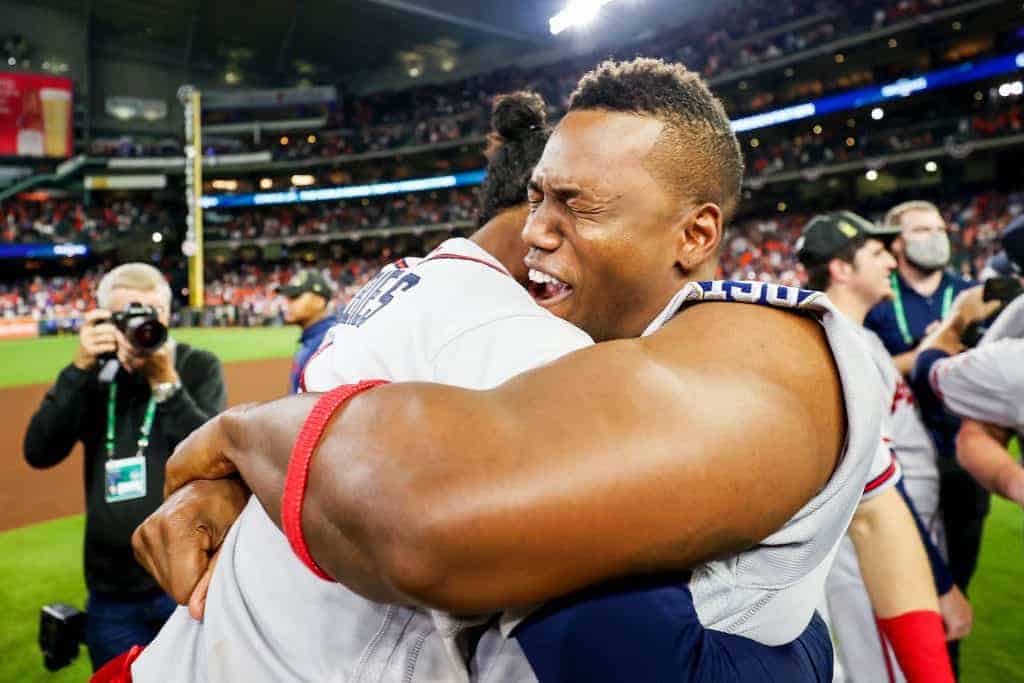 Thousands of cheering fans crowded the streets of Atlanta Friday in a parade celebrating the Braves’ improbable World Series win.

Just a few days earlier closer Will Smith entered in the ninth inning and slammed the door on Major League Baseball’s main event, finishing another fairytale ending. The Atlanta Braves defeated the Houston Astros in six games to win the 2021 World Series. With the win, the Braves got their first World Series victory since 1995. And still, that’s not the biggest storyline of the post-season. With his World Series Most Valuable Player (MVP) award, Jorge Soler finalized a historic playoff run for a particular group of Latino players: Cubans.

Let’s rewind a bit to the beginning of the playoffs. Cuba was well represented from the start of the 2021 postseason. If you scan the list of teams involved in the playoffs, you’ll find rosters filled with key players from the island: four in the Chicago White Sox starting lineup, two starters each for the Houston Astros, Atlanta Braves, and Tampa Bay Rays.

Big leaguers like first baseman Jose Abreu, third baseman Yoan Moncada, center fielder Luis Robert, and catcher Yasmany Grandal started for the White Sox. The Astros started Yuli Gurriel at first and Yordan Alvarez at designated hitter (DH) or in left field. The Braves with Jorge Soler at DH or right field and Guillermo Heredia at center field. The Rays had the newly declared Mr. October Randy Arozarena in the outfield and Yandy Diaz at first or third base.

It’s impressive if you consider that there were only 19 Cuban-born payers on the Opening Day roster this season, making them the third-largest group of players behind Dominicans (98) and Venezuelans (64) for the most players born in countries and territories outside the United States.

In an interview with USA Today, Roberto González Echevarría, author of “Pride of Havana: A History of Cuban Baseball,” explains how Cuban players have come out of the island and developed into major league stars.

“Cubans have produced top-notch baseball players throughout,” González Echevarría said. “It’s not new. (Orestes “Minnie”) Miñoso in the late ’40s, ’50s and ’60s, Tony Pérez, Camilo Pascual. This is recent, but I mean, go back to Adolfo Luque (1914-1935). In the Negro leagues Cristóbal Torriente, Martín Dihigo, Luis Tiant, the father. And so Cuba has very early produced top-flight players.”

Cuban excellence has been on display all year, and it has been magnified in the postseason. A few weeks before the spectacular Jorge Soler won the Wille Mays World Series MVP Award, we saw Randy Arrozarena homer and steal home in the same game, and he became the first player to accomplish such a feat.

“It’s always great pride to have that representation because, in one manner or another, we are always representing Cuba,” said Yuli Gurriel in game two of the Divisional Series press conference.” It’s where we’ve come out of, to where we signed. And truly, it’s a dream turned into reality.”

As the Atlanta Braves celebrate their championship at a planned parade Friday, “Soler Power”, the Havana native is the brightest star of the more than eight Cuban-born shining players vital for their respective teams in the memorable historic season.

Boris Q’va is one of six fellows in the Journalism Camp: Covering Race, Ethnicity, and Culture sponsored by the Hortencia Zavala Foundation (HZF). The first-in-class free 12-week program led by the Owner/Publisher of the Latino News Network and twice president of the National Association of Hispanic Journalists (NAHJ), Hugo Balta provides practical guidelines for fair and accurate storytelling.

Q’va is a young, highly creative, Afro-Cuban Journalist with expertise in Sports, Race & Ethnicity, and Culture.  He’s a member of the National Association of Hispanic Journalists (NAHJ) as well as the Society of Professional Journalists. Boris is a graduate of Full Sail University’s newest program, “The Dan Patrick School of Sportscasting.”